On the Arrest of Boris Nemtsov 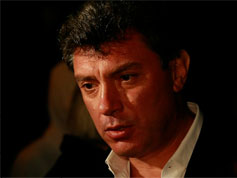 Russian authorities represented by the ruling tandem and their subordinate structures are worried. They are unnerved by the mass protest of the football fans and the nationalists, which joined them. The Russian Prime Minister Vladimir Putin urgently consorts with the fans telling them that the killer of their comrade is from the Caucasus, representing the enemy camp, which has to be tackled. He also issues a new decree stiffening the terms of stay in Moscow for non-residents. At the same time the Russian President Medvedev issues a decree necessitating the suppression of all mass protests. This is followed by the arrests of political opposition leaders, even of the participants of the meetings agreed with and allowed by the authorities. In particular, on the 31st of December 2010 several opposition leaders including Eduard Limonov, Ilya Yashin, and Boris E. Nemtsov, who are currently continue to be detained (see the attached documents).

Boris E. Nemtsov is one the prominent politicians of the “first wave democrats” in Russia. Mr Nemtsov is a distinguished veteran of the Russian democratic movement. He has been elected twice as a Governor of Nizhegorodskiy Region. He held posts of Energy Minister, Vice-Premier of the Russian Federation government and co-leader of SPS party. Mr Nemtsov has been a member of Russian Duma twice. He is a Doctor of Physics and Mathematics and a close ally of Boris Yeltsin and Egor Gaidar. Currently, Mr Nemtsov is one of the leaders of Solidarity movement and the author of numerous articles and a study exposing corruption and abuse of power in the modern Russian society as well.

Mr Nemtsov has been arrested when he was leaving the permitted and sanctioned political meeting on the 31st of December.  His arrest was made on the false accusation that he did not obey the police orders. On the 2nd of January Mr Nemtsov has been sentenced by the court to 15 days imprisonment for “failure to obey police orders”.  On the morning of the 3rd of January there were sole pickets in Mr Nemtsov’s defence next to a prison were he is held. Unsanctioned sole pickets are allowed by the Russian law. However, all sole picketers have been immediately arrested. Conceivably, Russian authorities have been tagging along similar practices of the neighbouring Belarus, violating the rights of its citizens and hoping to revolve its modern society back into Stalin’s era.

Such cynical and irresponsible actions of the Russian authorities set against the outburst of nationalism (which has been provoked by the authorities themselves), are designed to intimidate the rational intellectual society, and suggest that the authorities will not beat around the bush for the civilised opposition. It looks like the country is being prepared for a new dictatorship, which will be nothing but bloody and senseless.

Organisers of such systemic anarchy are hoping that democratic countries will not interfere with the attempts to gain “political stability at any price”. They hope to alienate Russia from the civilised democratic world and to have freedom to inflict martial law in the country.

Usually such behaviour signifies the political distress of the authoritarians in power. However, in this case the distress can be relatively long with unpredictable repercussions.

We would like to draw global attention to these events in Russia. The world can and must compel Russian government to act in a civilised manner in relation to its political opponents. The actions of the Russian authorities which can subsequently exclude the country from the civilised world must be disallowed.

Letter of Mr Nemtsov from his place of detention dated 31st December 2010.

On the New Year’s Eve at 10 p.m.I was put into a solitary cell of “Tverskoe” police station, where I was detained for almost two days.

The cell was nothing more but a concrete cage 1,5 meters wide and 3 meters long with no windows, plank bed or even a mattress – just concrete floor.

I was absurdly charged with disobedience to police requirements (up to 15 days in detention according to Article 19.3 of the Administrative Code of the Russian Federation). The report was filed by Captain A. Lapshin, who was not present at the Triumfalnaya Square and therefore has no knowledge of what happened there.

For three hours – from 7 p.m. until 10 p.m. – the police officers did not know what charges they are to bring against me, but then they got an order.

The authorities faced a problem – the arrest had been filmed. The video evidenced the lawless behavior of police officers, who did not seem to care that is was the New Year’s Eve or that the public protest had been authorized.

I understand that this an act of intimidation initiated to horrify the opposition and my family. My daughter Zhanna was for the first time taking part in a public protest and I am very proud of her.

I also understand that they are going nuts because they have no idea how to deal with the opposition. They are scared and nervous – they discredit themselves and Russia.

And I understand that we have no right to give up. And we shall not.

On 01.01.2011 A.Babushkin and L.Volkova – deputies of the chairman of the Public Supervising Committee for Moscow – inspected the observance of human rights at the police station of the Tverskoy district of Moscow.
The inspection revealed the following violations and positive aspects:

1. The walls of the cells are covered with textured plaster. The lighting is very dim, which makes it impossible to read. There are no windows. The ventilation is absent. The cells are not intended for detention of people for a period of two days.

2. The detained B.Nemtsov was found in one of these cells. The detained was not provided with a mattress, bed sheets, individual sleeping accommodation and hot meal. The listed violations of the Governmental Decree #627 are left unattended.

3. Nemtsov’s detention at the police station appears to be groundless. According to the report on the administrative offence, the police officers Ukhabov and Polyakov have allegedly heard Nemtsov shouting out anti-government slogans. However, according to Nemtsov there was only one police officer participating in the arrest. Nemtsov’s words are also confirmed by the video, which shows Nemtsov approaching the place of the public protest.

4. The cell phones of the detained get confiscated by the police officers,  which is not stipulated in the Administrative Offences Code of the Russian Federation or the Governmental Decree #627.

5.  Konstantin Kosiakin was kept in the next cell, who was arrested exiting the Mayakovskaya Metro Station. Kosiakin saw a line of policemen moving in his direction and made a step back to give them way; at this time he was arrested and accused of the failure to comply with the legal requirements of police officers and brought to the police station.

6. The second (empty at the time) cell is filthy.

8. The police station fails to provide information stands for the detained clarifying their rights.

9. The information stand for visitors fails to provide contact information of the Public Supervising Committee.

Recommendations:
1. Eliminate the listed above violations;
2. Eliminate cases of detention of individuals charged with administrative offences, who may be released on undertaking to appear;
3. Implement an urgent refurbishment of detention cells.